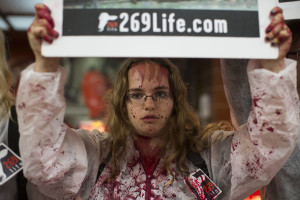 NAHARIYA, ISRAEL – NOVEMBER 20: (ISRAEL OUT) An activist holds up a placard calling for animal rights after spilling mock blood on a meat display window at the Soglowek meat factory shop on November 20, 2013 in Nahariya, Israel. Activists from the Israeli animal rights movement “269Life” were arrested after they protested in the shop. Last year some of the movement’s activists branded themselves with the numbers 269 in solidarity with a calf from an Israeli farm who had been branded with the same numbers. (Photo by Uriel Sinai/Getty Images)