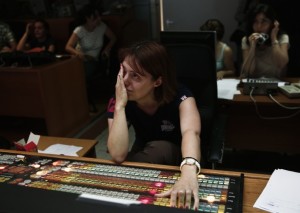 An employee wipes tears as she works with colleagues to broadcast a Web-Tv signal at the control room of the Greek state television ERT headquarters in Athens June 12, 2013. Greece’s government promised on Wednesday to relaunch a slimmed-down state broadcaster ERT in a matter of weeks after a firestorm of protests from journalists, trade unions and coalition partners over its sudden closure. REUTERS/Yorgos Karahalis (GREECE – Tags: BUSINESS EMPLOYMENT POLITICS MEDIA)